micro:bit is a pocket-sized microcontroller designed for kids and beginners learning how to program, letting them easily bring ideas into DIY digital games, interactive projects and robotics. micro:bit comes with a variety of on-board modules, including a 5×5 LED matrix (also supports light detection), 2 programmable buttons, motion detector, compass and Bluetooth® Smart module. Additionally, you may attach more modules such as a servo motor, RGB LED lights through five I/O rings or 20 edge connectors.

On-the-go starter kit is with USB cable, 2 AAA batteries and battery holder, allowing you to upload program and carry it around right after the unboxing.
micro:bit can be programmed with Microsoft Blocks Editor via graphical editor or JavaScript editor.

Specification:
Microprocessor: 32-bit ARM® Cortex™ M0 CPU.
A 5×5 LED matrix with 25 red LEDs to light up. Each LED is individually programmable and can display animated patterns, scrolling text and alphanumeric characters.
Two programmable buttons. The micro:bit can detect either of its two buttons being pressed and unpressed and can be programmed to act on that or send the information to another device. Use them as a games controller or control music on a smartphone.
On-board motion detector or 3-AXIS digital accelerometer that can detect movement and tell other devices you’re on the go. It measures on 3 axes, X, Y, Z, and sends back the data. The micro:bit can react to this data and tell other devices it is moving. The device will also detect a small number of standard actions, eg shake, tilt and freefall. Turn the micro:bit into a spirit level. Use it for motion-activated games. Have your micro:bit light up when something is moved.
A built-in compass, 3D magnetometer to sense which direction you’re facing and your movement in degrees. This data can be used by the micro:bit in a program or be sent to another device. The magnetometer could also detect the presence of certain metals and magnets.
Bluetooth® Smart Technology (previously called Bluetooth Low Energy) to wirelessly communicate with other Bluetooth Smart devices and exchange data and commands. Connect the micro:bit to other micro:bits, devices, phones, tablets, cameras and everyday objects all around.
Five ring input and output (I/O) including power (PWR) and ground (GRD). Each I/O ring is programmable to be either analogue or digital. The rings are suitable for crocodile clips or 4 mm banana plugs, meaning an external sensor can be connected to measure things like temperature, moisture, proximity to other devices. The micro:bit reads values from the sensor and acts on them or sends them to another device. The micro:bit can also send control commands to the rings – these could be used to control things like a motor or robot. The PWR and GRD rings supply 3 volts and could be used to power a separate device.
Edge connector: 20 pins, 1.27 mm pitch and extend 7.62 mm from board edge suitable for standard connectors. This allows the micro:bit to be connected to another device, eg Arduino, Galileo, Kano and Raspberry Pi through a standard connector.
Micro-USB controller: This is controlled by a separate processor and presents the micro:bit to a computer as a memory stick. This means the program can be dragged onto the micro:bit in the same way a file is dragged onto a memory stick. 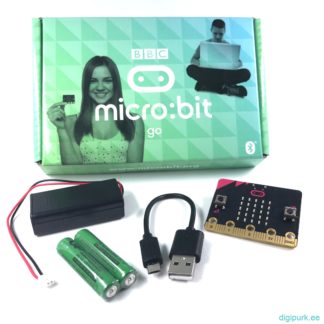